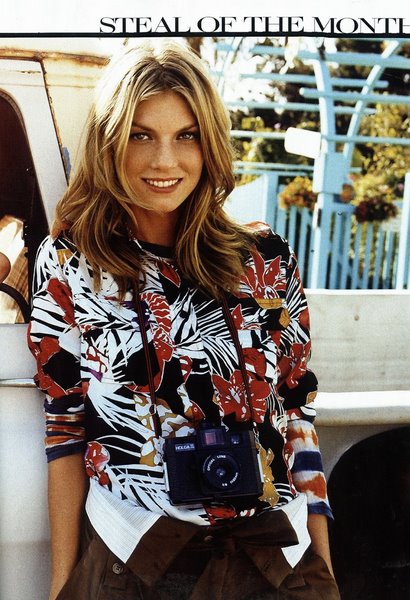 Angela Lindvall is a perfect example of beauty and brains working together towards a sustainable planet, and she’ll make you think twice before purchasing that new spring wardrobe.
Contrary to popular belief, becoming a model isn’t every little girl’s dream. Angela Lindvall was happy with her tomboyish characteristics growing up, but her beauty won out as she got older and led her down a path that was both surprising and enormously successful. Now, well over a decade into her modeling career and having worked for high profile clients including Victoria’s Secret, CHANEL, Louis Vuitton and Jimmy Choo (just to name a few), the Midwest native has been able to use her public influence to voice her strong environmental beliefs to support a better way of living. Through various initiatives, learning how to combine the fashion industry with sustainability and using her knowledge to co-host Planet Green’s Alter Eco, Lindvall has proven what a little consciousness can do.
YRB: What made you hesitate about heading down the model career path?

Angela: I was a fish out of water. I didn’t know a thing about it. I didn’t consider myself to be beautiful when I was young. I was quite awkward… So the whole “fashionista” thing threw me off, and I was overwhelmed by all the ego involved. But I found a way to not take it so seriously and enjoy all of it. I became more comfortable in my own skin. I also began to feel beautiful and more feminine.
YRB: What really draws you into a brand and makes you want to become the face of it?

Angela: I can’t say I’m a big fashion-y girl even to this day. I DO know what a good cut is, so now I’m spoiled when it comes to shopping. I know too much about fabrics and tailoring, which is important. But ultimately when it comes to doing my job, I become whatever the client wants me to portray. It’s not always me. Sometimes it is, and then it’s just about being me and capturing a brand’s essence. I like classic, with a gypsy twist, a bit bohemian. Recently, I’m starting to represent brands that are making conscious choices, which speaks to me on a personal level. I’m working with pureDKNY, Biotherm Skin.Ergetic and John Hardy. They all represent something authentic and conscious. But I love transforming into all the wonderful characters I get to portray with all the high fashion stuff I do, too.
YRB: When did you start getting involved in eco-consciousness?

Angela: I was always an earthy girl who grew up in the middle of the country, but it was when I was 18 and moved to N.Y. that I really started becoming aware of major issues. I was jolted by the information I started to discover about the state of our planet. I thought, WHY ISN’T THIS ON THE FRONT PAGE OF THE NEWSPAPER?! What can we do?! We need to change! So I got really enthusiastic and started an organization to try and use mainstream media to inspire change through engagement, inspiration, education and a focus on solution. I named it The Collage Foundation because I felt the environmental movement was missing the mark. It was all brown and green and was only tailored to the granola type. I painted my message florescent pink with graffiti and invited all to be a part. I knew judging and eliminating shut people out. I wanted to invite people in. I’m really happy now to see what we sought out to do SO long ago has come to fruition. “Green” is a buzz word everywhere. As much as I’m not a huge fan of the word “green,” it’s a great thing. People are so much more aware and involved these days compared to 10 years ago when I started. Now, it’s really about creating social movements, engaging people on their power to change things. Infrastructures, business, industry – it’s all a win-win as well. There are a lot of opportunities out there and solutions to do things differently. It’s only a matter of time where it will be second nature when it comes to business because it’s what the consumer will demand.
YRB: How did you first incorporate your interest in sustainability into your professional life with the fashion industry?

Angela: At first, I found them to be very separate. I had my career on one hand, which gave me access to speak out and have a bit of an audience. Yet I felt my environmental endeavors were a whole separate world. It’s only recently that they are really coming together on a large scale. I’m working with the brands I mentioned, and looking into ways to implement NRDC’s “Clean by Design” initiative, which improves textile manufacturing, thus reducing the major pollution it creates. But also possibly launching products of my own in the future… but in the meantime, promoting things I believe in.
YRB: How do you deal with working with brands that don’t mirror your beliefs about eco living?

Angela: Well, I usually work with luxury brands, which means top quality. Usually, it’s natural fibers, not synthetics, and they are things that are well made and last. Manufacturing textile is the real issue, which has nothing to do with the brand. They just buy the material after it’s made. That’s where Clean by Design comes in, which will be great if major brands will support it because they have leverage. Otherwise, a long time ago, I realized if I became a stickler about what I am willing and not willing to model, I’d have to quit my job! The world and infrastructure is not up to par yet, and that would mean me being so far ahead of the curve that it works against everything. It’s about timing, inspiration, education and invitation. That’s what I’m trying to do. But there IS a way.
YRB: How has it been working recently with those brands that do share your green perspective?

Angela: Well, John Hardy has been sustainable since way before it was mainstream, so we just totally connected on so many authentic levels. I love it! PureDKNY is so inspiring because DKNY is a brand I’ve had a longstanding relationship with, and to see the power they have to make a major impact not only on the environment, but women’s lives around the world through CARE… they are a leader. Biotherm is amazing because it’s the first luxury brand to do an organic line. Not only that, it’s speaking to the working woman of today fighting fatigue. It is a holistic approach to skincare, which is a whole package – the products you use, the way you eat, the way you live, and even the way you think. I feel like the seeds I planted long ago are finally fruiting. I’m so happy!
YRB: Who are some of your favorite eco designers?

Angela: NRDC, Global Green, CARE, charity: water, ForestEthics, Africa Foundation, and I have a big initiative upstate N.Y. in local sustainable agriculture, all starting with a tiny farm [called] Camp Hill Farm, which has become a big movement leading to the RFA. We are creating a new model that is very promising. Long time in the works, and hard work, but as Henry David Thoreau said, ‘Faith in a Seed.’ What we plant now, with love and nurture, becomes beautiful fruit.
YRB: How did you get involved with hosting?

Angela: Again, a weird fluke. All good timing and support of the universe, I guess. It was a great experience. Ultimately, Adrian Grenier and Peter Glatzer and I had very similar visions and executions. I’m now a big supporter of SHFT.com that they launched recently.
YRB: Are you looking to make more of a transition from modeling into acting?

Angela: I am… I’m patient. I have always had a very promising response. I always get close to the roles I audition for. I took a three-year hiatus because of some life tragedies, and now I’m exploring it again. I do love it, and I know I can do it well. I just hope the timing, and working my way up the totem pole, pans out. It’s a very competitive industry, so I have to weigh everything that is on the table for me, but it would be nice to experience a serious role once again. It’s really fun.
YRB: What would be your ideal role?

Angela: Well, people tend to want to cast me as sexy, which I can do, and would love to do the super glam gal, because that’s easy for me, I do it all the time. But I’m really still a tomboy country girl, and I’d love to explore that world. I prefer positive roles. I’m not into super sex scenes or thrillers… I guess I’m the “good guy.” But serious drama really interests me. I have a lot to draw from and I’d love to express it through film.
YRB: What are some tips for people to live green in their every day lives?

Angela: Start by having a relationship with nature. We ARE nature, but have removed ourselves so much from our core. Even 15 minutes when you wake up. Clear your mind, stop thinking and worrying and just focus on goodness and positivity… Honor the earth… Then be aware of what you support with your dollars. It’s a big machine and it’s all run by money, so invest into products you believe in. Buy non-toxic, natural, non-synthetic, mass-produced goods. Support your local farmers. Eat organic. Love yourself… It all starts with you. Our inner environment is as important as our outer environment. Then it trickles to our family, our community, our town, our cities, our state, our country, etc. Our world. It starts with you.