Angela Lindvall: The Model and Certified Yogi on Going ‘Beyond All of the Superficial’ By SHARON FEIEREISEN 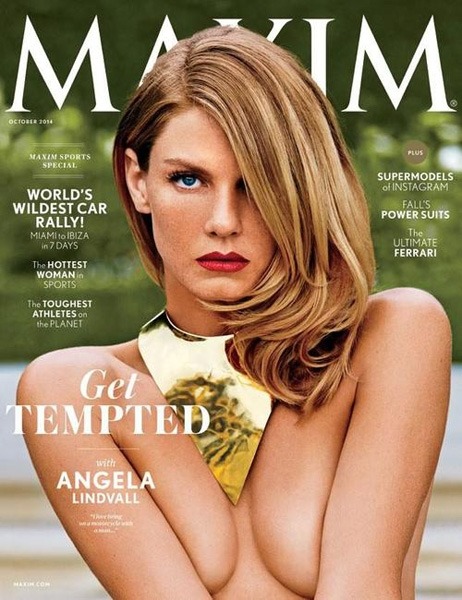 One of the world’s most successful models, Angela Lindvall, has appeared on the covers of ELLE, Harper’s Bazaar, Marie Claire, Vogue and W, has walked in six Victoria’s Secret Fashion Shows and has appeared in campaigns for Fendi, Calvin Klein, Christian Dior, Chanel, Versace, Prada, Hermes, Valentino and Louis Vuitton. Needless to say, it’s impossible to list all of her modeling achievements. These days, however, Angela is more focused on environmental activism and yoga. In fact, she’s now a certified kundalini instructor. We caught up with the supermodel, who recently hosted a yoga class at Impact Garden, a fashion sustainability and wellness event hosted by Rebuild Globally, to talk beauty secrets and why she loves yoga. Here’s to focusing on left nostril deep breathing next time a bout of stress hits…
theFashionSpot: Is yoga your only workout?
Angela Lindvall: No. Yoga for me is more of a daily practice that keeps me both physically fit, but even more emotionally and mentally fit.
tFS: Can you tell us what a typical week workout-wise is for you?
AL: I also do Pilates, aerial, hike, run, some martial arts and fun dancing. It’s really the meditation aspect of yoga I do daily.
tFS: What attracted you to kundalini yoga specifically?
AL: Though some of the kriyas are strange indeed, I found that it was so transformative that I kept going back. I started seeing it have an effect on my life. Then I started to learn the actual science behind it, which made a lot of sense to me. It works.
tFS: Many women who are time-crunched avoid yoga because it has a reputation for being less cardio intensive. What do you say to women who worry that yoga isn’t as effective as some other workouts?
AL: I find that yoga is not just working the physical body, but also all the subtle bodies. Through different breathing techniques and postures, one is not only burning calories but also stimulating the glandular and nervous systems.
tFS: What is your go-to yoga move when you’re stressed?
AL: Left nostril deep breathing. Calming breath.
tFS: What are some of your favorite sportswear brands?
AL: I really like this new brand PRJON.
tFS: Favorite healthy snacks?
AL: Avocados, nuts, veggies and hummus.
tFS: How do you prepare for a big shoot?
AL: Adequate sleep is a must. Lots of water and a good sweat.
tFS: What’s something about modeling that may surprise people?
AL: People assume so much about me because I’m a model and always get surprised when they meet me. That’s kind of sad because I’m “nice and normal,” which surprises people. I think being a model gets a bad rap. I know some very cool and down-to-earth models.
tFS: As a model, you must have faced a lot of scrutiny. How do you work to keep your confidence up when people are trying to knock you down?
AL: It’s true, often models can have the hardest pressure to look great all the time. It tends to put a microscope on the external. I don’t want to identify myself or base my value on that. I just remember my truth, the infinite part of myself that is so far beyond all of the superficial…that usually sets me straight.
tFS: Best beauty tip?
AL: Clean food, deep breathing, healthy thinking, exercise.
tFS: What are some tips for looking good in a photo?
AL: Lighting is number one…but relaxing and shining from within would be number two.
tFS: What is it about environmental issues that you’re so passionate about?
AL: We and the Earth are a symbiotic relationship. We cannot sustain ourselves without the health of the planet. Not to mention preserving natural beauty.
View Full Article Here
Share
0
Model Mentorship