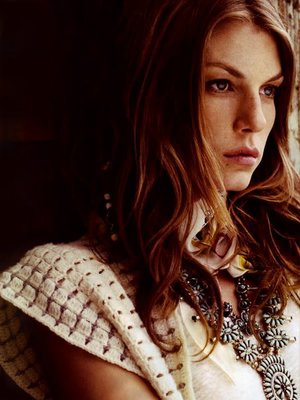 Former Victoria’s Secret Angel Angela Lindvall has appeared on the covers of most major fashion publication around the globe, and is one of the few models to have worked with nearly every major fashion house from New York to New Zealand. But what this American beauty likes to be known for the most are doubtlessly her ecological conservation efforts.
She does whatever she can in terms of working partnerships to raise awareness about the environment: for example, in 2009, she teamed with Edun Live and Yoox.com to design a line of ‘green’ clothing, whose proceeds were donated to the Green Cross International.

Angela Lindvall John Hardy
Earlier, in 2007, during a scouting trip for Alter Eco in Bali, she visited the compound of eco-friendly jeweller John Hardy and was so inspired by the company’s value of environmental sustainability, she agreed to work with John Hardy’s Head Designer and Creative Director, Guy Bedarida, to create the Hijau collection, the proceeds of which were donated to Forest Ethics.
Not surprisingly, soon after, she signed a contract to become the face of John Hardy,appearing in all of the company’s advertising campaigns between Fall 2010 and Fall 2011. Lindvall partnered with Bedarida again in early 2011 to create the Hijau Dua collection. A continuation of the Hijau collection, a portion of the proceeds from the sale of Hijau Dua pieces were donated to the planting of bamboo seedlings in Bali.
In October 2011 Lindvall proved she really got the hang of jewellery design and started her own line with John Hardy called Angela by John Hardy. Currently sold on QVC, the collection is inspired by Lindvall’s travels and interest in ancient cultures.
But her eco-credentials don’t stop there! Lindvall is also is the founder and president of the Collage Foundation, an organisation promoting sustainability and environmentally conscious choices among young people. She has also created the Non-Profit Collage Foundation to educate younger generations, particularly younger girls, about their role in the world’s environmental issues and how they can make a difference in a number of ways.
But she doesn’t just talk the talk–Angela herself tries to be the perfect role model when it comes to saving the planet. For example, rather than live in a portered high rise in New York, as most top models would, Lindvall resided on a houseboat docked on Manhattan’s Upper West Side.
When she moved to LA for her acting career, she did much to ensure the shift was as green as possible, by installing a filtration system at her home (to cut back on bottled water); planting fruit trees and herbs to consume rather than going to the supermarket for them; setting up a charging station for her Ford C-MAX Energi hybrid; and installing solar panels on her yurt/guesthouse in the garden.
No matter where she lives, she composts, grows her own vegetables, raises chickens and has even dug her own well. She also recycles items in her wardrobe through the Collage Foundation; supports organic farmers through an alliance she started up, and of course, sets the bar for ecological behaviour for young people in the community.
A supporter of social networking, she uses her blog to raise awareness of issues ranging from emerging alternative energy sources to GMO foods. Of her blog, she sums up her truest goals and reveals her most intimate thoughts: “My dream is to share this experience with the world in a way that will inspire the lives of everyone to pursue happiness. I believe there is a great deal to learn and I am open to all the challenges that will be presented along the way.”
We thank Angela for helping us to learn, and challenging us on our journey, too.
View Full Article Here